Despite my grueling reading year, I have a wonderful announcement to make: I completed my reading challenge! That’s right, I read 100 books this year (several of which were graphic novels and poetry collections)! To celebrate, I am doing nothing. However, I do still have a few books I need to talk about before the year is out. Those books? The ones I didn’t finish. This could be for a variety of reasons (I couldn’t get into it, I took too long getting back to it, or the book just plain sucked). If you’ll remember, I did a mid-year DNF list back in June. I’d meant to wait until the end of the year, but I’d already DNF-ed eight books by that point so I went ahead and wrote about those eight books right away. Since then, I’ve DNF-ed six more books. Since we’re just a few days from the end of the year, I figure I won’t DNF anything else. And so, here are the six books I DNF-ed from July to December of 2017:

Strictly speaking, there’s nothing wrong with this book. The characters are fine, the plot is fine, and the world-building is fine. But that’s the problem: everything is just fine. I felt no motivation to continue this book. I put it down to read other books on more than one occasion. At first I thought the problem was that it is the first book in a spin-off series from the Seven Realms series. I’ve never read that series, so I thought perhaps that was keeping me from enjoying the book. However, according to several reviews I consulted, you don’t have to have read the Seven Realms series to enjoy the Shattered Realms series. In fact, according to many of those same reviews, having read the previous series often hindered enjoyment of this book due to a character death at the beginning. So I had to conclude that I was having the same problem with this book that I’ve had with lots of YA fantasy this year: I couldn’t connect to the characters. On top of that, I didn’t really care for the writing style. However, deciding to finally just give up on this book didn’t happen until I’d amassed a pile of books I was “currently reading.” Feeling overwhelmed, I went through that pile and decided which books I simply was not going to return to. This one landed on the chopping block. Unfortunately, this novel just didn’t light a fire in me. 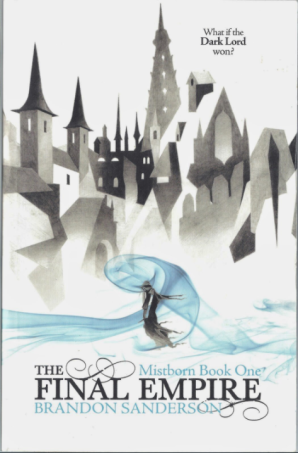 Speaking of books that landed on the chopping block during that initial sweep, I decided to quit the first book of the well-loved Mistborn series at that same time. Maybe I read it before I was ready for adult fantasy, but I really didn’t care about the characters and the pacing didn’t work for the story. And yet, Brandon Sanderson is BookTube’s darling, so I still considered continuing eventually. However, around that same time, I discovered blog posts written by Sanderson in which he reveals he is a giant homophobe. He is anti-same sex marriage and very closed-minded. He blames his bigotry on being a Mormon, but I don’t know enough about Mormonism to know if that’s fair. Either way, I cannot in good conscience support someone so unapologetically hateful. Sure, he’s since altered his stance somewhat, but slightly less homophobic is still homophobic. So, it was without an ounce of guilt, that I finally closed this book for good. 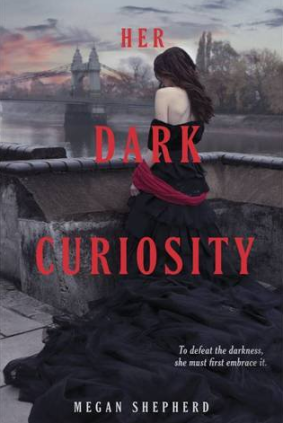 Despite recommending this series a few times earlier this year, I wound up disliking this book. My main problem was the narration. Juliet was so annoying. It seems Ms. Shepherd confused inner conflict with just listing problems and complaining about them. This was not the Juliet I remembered from The Madman’s Daughter. This Juliet is unsure and cautious; this Juliet lets men take over her pursuits. I simply don’t recognize this character anymore. When deciding whether or not I wanted to persevere, I did what I sometimes do when I kind of want to DNF: flipped through the rest of it to see snippets of what happens to decide if I want to find out how the characters got there. When that didn’t help, I did the second thing I do when in this predicament: look up spoilers and plot summaries. I read the entire plot summary for this book and realized I didn’t care about anything that happened. I didn’t want to know about it in more detail. I read the plot summary for the final book in the trilogy and was equally as uncaring. Even worse, there’s a love triangle in this series. Juliet has genuine chemistry with one of the boys, and yet the author is hell-bent on pushing her into a relationship with the other one. He doesn’t even treat her well. It’s not that he’s abusive, but he pushes her away for no good reason and we’re supposed to be happy when they get engaged? No thanks. So, anyway, I take back my recommendation. I still recommend the first book, but don’t bother continuing on with the series. Trust me when I say your curiosity will not wonder what could’ve been.

This was another book I kept telling myself I’d get back to because of how much other people love this series. Most people on Twitter who’ve read it say it’s fantastic. But I just couldn’t get into it, so I kept putting it down to read other things. Earlier this month I took all my TBR books off my shelves to decide whether or not I planned on keeping them. I saw videos of people doing this and felt motivated. Among those books were the other two Lumatere Chronicles books (and thus, this one as well). I finally had to face the facts that, as good as people make it sound, I won’t be reading this series or even finishing this book. I think it ultimately comes down to the writing style. The inner monologue is focused more on what’s happening than Finnikin’s own personal reflection and there’s minimal dialogue. This makes the novel a slog to get through. In the end, I just couldn’t do it anymore. When caught between a rock and a hard place, I chose the hard place.

Adam Silvera’s books have been hyped up for a while, so I was eager to take the plunge. Unfortunately, I only made it a couple chapters into this book before I realized I just couldn’t do it. My main problem with this book is the characters— well, one of the characters. I can’t stand Rufus. We first meet him almost beating his ex-girlfriend’s new boyfriend to death. For no reason except Peck is dating Rufus’ ex. In fact, he even tells us that, had he not received his call from Death-Cast, he very likely would have killed Peck. And we’re supposed to sympathize with this character or care about his growth? I don’t care if he’s a foster kid, that kind of behavior is not okay. In fact, it’s terrifying and I don’t want Mateo anywhere near him, dying or not. On top of that, I hate the way he’s written. He uses this strange lingo that reminds me of those leather-clad white boy gangs from the fifties or Italian gangsters. It just felt… off? It was so cringy that I had to stop reading. Instead, I did what I did with Her Dark Curiosity and flipped ahead to the end to see if I wanted to know how the characters get where they go. I did not. These boys may die at the end, but this book died the second Rufus was put on the page.

Once I decided to DNF Adam Silvera’s latest work, I picked up John Green’s. That was a mistake. I only had the book because there was a signed copy at Walmart and the summary sounded interesting. Unfortunately, this is John Green’s most pretentious writing yet. Aza’s narration is ridiculous. Aza has anxiety and, along with that, an intrusive fixation on eating and digestion. She has researched the topic so much that she lives in fear of digestive diseases. She is utterly repulsed by the whole thing. And all this was fine, but it’s the way she tells us. She says, “I find the whole process of masticating plants and animals and then shoving them down my esophagus kind of disgusting.” Just say “I find the whole process of chewing and swallowing kind of disgusting.” Otherwise you’ll make your readers strain their eyes from rolling them so hard. Another example of using obnoxiously pretentious language when a few words would suffice is, “As I sat beneath fluorescent cylinders spewing aggressively artificial light, I thought about how we all believed ourselves to be the hero of some personal epic, when in fact we were basically identical organisms colonizing a vast and windowless room that smelled of Lysol and lard.” This is so unnecessarily wordy and try-hard. You’re in a cafeteria, thinking about how everyone thinks they’re the center of the universe when really we’re all the same. We all eat the same lunch in the same room. That’s it. That’s all you need to say. Aza also goes on this tangent about control and how we tell ourselves that we choose to go to lunch, but really it’s the lunch bell that determines when we go and… yes? That’s how lunch at school works. It’s not about pretending you have control. That’s just how it is. There’s also her friend’s quirky art project and her other friend’s even quirkier improvement on said project (and I already have issues with Perfect Daisy that I won’t get into). The only good thing I got out of this book is the new record I set for my fastest DNF. Previously, it had been two chapters. Now it’s five pages. Turtles All the Way Down could’ve been so good, had it not been written so pretentiously. But, alas. This book needs to go all the way down to hell.

7. Given to the Sea by Mindy McGinnis

I was really excited to read this book because I loved The Female of the Species. However, I read a few chapters and couldn’t quite get into it. So, I put it on pause. For a very long time. When I couldn’t decide whether or not I wanted to get back to it, I looked up some reviews. It turns out this book it not well-loved. And, while that’s not necessarily an indication of how much I’d enjoy it, it doesn’t bode well. Also, apparently it puts an inordinate amount of focus on sex. But not consensual sex, oh no. Basically, the entire plot revolves around how Khosa needs to get pregnant and have a daughter so she can be sacrificed. And the king pretty much decrees she must be impregnated by any means necessary. There’s also this weird relationship between adopted siblings. In fact, there’s a whole love square. After reading The Female of the Species, which actively challenged rape culture, this is a huge step back for McGinnis. Unfortunately, Given to the Sea should’ve been given to the trash.

Have you DNF-ed any books this year? If so, what were they? Tell me about them in the comments!