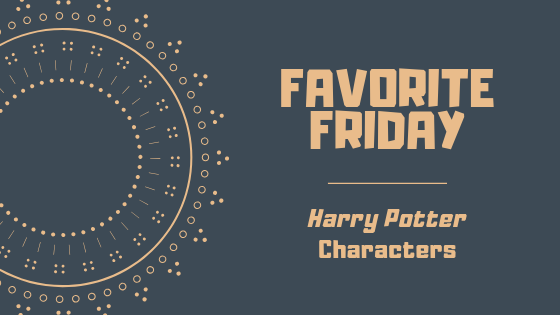 Favorite Friday is a meme in which I discuss some of my favorite things. Some Fridays it’ll be based on a topic, while others it’ll just be about some of my recent favorites.

Despite my decimated respect for JK Rowling, Harry Potter will always have a special place in my heart. This series gave me a childhood and got me through high school. I wouldn‘t be who I am today without it. As such, I thought it’d be fun to make this week’s FF post about my favorite characters from the series. Now let’s levi this corpus!

Let’s get one thing straight: Harry Potter is the best character in Harry Potter. If you disagree, you’re wrong. Harry is witty, kind, courageous, and clever. He will do anything to protect those he cares about, and even those he doesn’t. He goes through so much trauma, but doesn’t let it change who he fundamentally is. Harry James Potter is a wonderful character and I would die for him.

Ginny Weasley is a bad bitch. She’s ballsy and brash, and doesn’t take shit from anybody. Also, she’s 1,000% a lesbian. Her crush on Harry is a prime example of compulsory heterosexuality. I said what I said.

I love Hermione not because of what makes her “the brightest witch of her age,” but because of how flawed she is. It’s because she’s allowed to be emotional and a bit of a know-it-all that so many girls relate to her. Her flaws make her human.

All he wants to do is play Quidditch and date a pretty girl. Moreover, he’s exactly what Draco Malfoy stans want Draco to be— someone raised around the Dark Arts, who chooses the side of justice. He is the only jock I’ll ever support.

Honestly, I don’t know why I love her. I just do. She’s a great example of a non-evil Slytherin. She ditches her bigoted family because she knows their beliefs are wrong. I just find her really cool.

Though not an official Marauder, Lily is the best of that bunch. She reminds me a lot of Ginny with her “take no shit” attitude, but she’s also a softer person. Lily is so deeply, deeply kind-hearted. She deserved to live.

Who are your favorite Harry Potter characters? Let’s discuss in the comments!