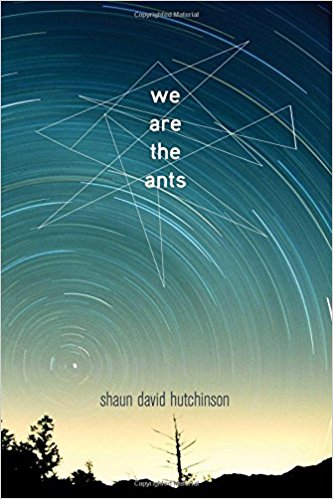 Official Summary: Henry Denton has spent years being periodically abducted by aliens. Then the aliens give him an ultimatum: The world will end in 144 days, and all Henry has to do to stop it is push a big red button.

Only he isn’t sure he wants to.

After all, life hasn’t been great for Henry. His mom is a struggling waitress held together by a thin layer of cigarette smoke. His brother is a jobless dropout who just knocked someone up. His grandmother is slowly losing herself to Alzheimer’s. And Henry is still dealing with the grief of his boyfriend’s suicide last year.

Wiping the slate clean sounds like a pretty good choice to him.

But Henry is a scientist first, and facing the question thoroughly and logically, he begins to look for pros and cons: in the bully who is his perpetual one-night stand, in the best friend who betrayed him, in the brilliant and mysterious boy who walked into the wrong class. Weighing the pain and the joy that surrounds him, Henry is left with the ultimate choice: push the button and save the planet and everyone on it…or let the world—and his pain—be destroyed forever.

My Thoughts: This book sells itself as an alien adventure starring a troubled gay kid, but that’s really not what it is. The aliens are very much a backdrop to Henry Denton’s fraught Floridian life. It reads far more like a contemporary YA novel than a sci-fi one, which is fine, if that’s what you want to read. But I was promised aliens and gays in space. So I felt let down. Still, the overall story was pretty good. It’s a character-driven story with a cute budding romance. But nothing about it really stood out to me. And that was an issue for me. It’s the tragic story of a gay teenager coming-of-age which… we have several of. Not nearly as many as coming-of-age stories of troubled straight teens, but still. When you’re expecting aliens, it’s a let-down.

I will say the writing style was really good. It was quirky and even lyrical at times. And Henry’s perspective is wry and embittered, which is very relatable in 2016 America. Henry was the perfect character to narrate this story, though it leaves the reader wondering the same thing as Henry does: why did the aliens choose him to decide the fate of the world?

I wasn’t overly attached to any of the characters, though I can’t quite place why. Maybe their storylines felt too cyclical, each one circling back to the same point. Maybe that was the effect Shaun was going for, but it didn’t endear me to his characters. Only three characters achieve any sort of development, not including Henry’s love interest Diego. And this doesn’t do their love story any favors. I’m left wondering what it is Henry loves about Diego, given that his character is so flat.

As the story progressed, I realized I was more interested in the Denton family dynamics than anything else. Had the book been written and marketed as their story, perhaps I would’ve enjoyed it more.

I would say, more than anything, this book is about Henry Denton’s depression. Which was promised nowhere in the summary. Mental illness rep is important, but it was quite unexpected in an alien book. It was handled realistically and well (aside from Henry spending only a week in treatment), so I can’t fault the rep. It’s just that it isn’t what this book said it was about. Someone really missed the mark when composing the summary for this book because it sure as hell is misleading and I’m still not really over that.

And now I want to talk about the aliens in this book. Despite being the ones to literally cause the conflict in this book, they are pretty much irrelevant. It could’ve been a mad scientist or a magical wizard who kidnapped Henry and told him he had to decide whether or not the world ended and it wouldn’t have made a damn difference. What kind of alien book completely underutilizes its aliens? Their method of communication is strange too. It makes perfect sense that they wouldn’t speak English, but you’d think such an advanced species would’ve invented some sort of translator device. But no. It’s a strange mat that causes euphoria or intense pain, whether the answer is right or wrong respectively. And that scene was… uncomfortable. Especially when Henry is screaming about “sweet euphoria.” I felt like a voyeur and wanted to close my eyes but couldn’t. Ultimately, the aliens completely disappear for the last third of the book. They’re mentioned and cause lots of impact, but are never there. And I get that maybe that was the effect Shaun was going for. Paranormal realism. But it doesn’t work for me. It honestly should’ve just been a contemporary.

The ending was a major let-down for me. By this point the aliens are dropped completely and the impending apocalypse issue is never resolved. Henry literally finds happiness and then says, “fuck it, who cares if the world ends.” A grievous contradiction. It’s then also implied that **SPOILER** the aliens might never even have existed at all. Which there was no indication of at all before and flies in the face of Henry literally disappearing for days at a time. But okay. Metaphors. And then you get to the epilogue and realize this whole thing was written as an extra credit project to his teacher. He deadass told his teacher about the time he almost fucked Diego and the times he did fuck popular trash kid Marcus. Which is fucking creepy.

This review seems like I hate this book, but I really didn’t. It was a cute story. It had some interesting themes, including whether humanity deserves saving and whether people can change. The assholes are punished for their behavior and most loose ends are tied up. And, as I said, the writing style is excellent. I especially liked reading Henry’s little flash fictions on apocalypse scenarios. But it wasn’t what the summary promised and the ending was lackluster and confusing. It was an average quirky YA love story that bordered on unhealthy (with the implication that it’s on its way to becoming healthy, but still). Overall, it was a good story, but not something I found to be memorable. And it could use more aliens.

(This review was originally posted on my Tumblr.)

One thought on “Gays in Space… Sort Of: A Review of “We are the Ants” by Shaun David Hutchinson”