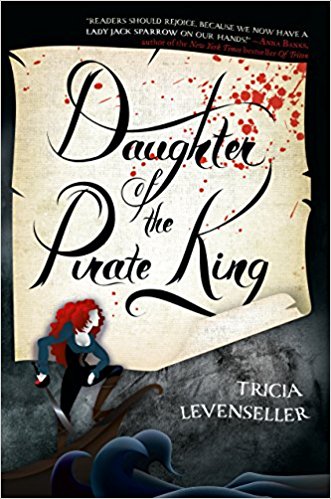 Official Summary: Sent on a mission to retrieve an ancient hidden map—the key to a legendary treasure trove—seventeen-year-old pirate captain Alosa deliberately allows herself to be captured by her enemies, giving her the perfect opportunity to search their ship.

More than a match for the ruthless pirate crew, Alosa has only one thing standing between her and the map: her captor, the unexpectedly clever and unfairly attractive first mate, Riden. But not to worry, for Alosa has a few tricks up her sleeve, and no lone pirate can stop the Daughter of the Pirate King.

My Thoughts: I’ll be honest: I’ve never been a big fan of pirates. I didn’t grow up watching the Pirates of the Caribbean movies. Never played pirates as a kid. So I wasn’t exactly hyped for this book. Still, the plot sounded interesting enough, so I thought I’d give it a try. At the very least, I would hopefully get a badass female lead. And oh my god. I was so pleasantly surprised by how much I loved this book. The characters were endearing, the ships made sense, and the plot was exciting. From the very first page, I was hooked. I immediately fell in love with Alosa and cared deeply about her story. I guess it just goes to show: sometimes the best books are the ones you don’t expect to love.

As I said, I fell in love with Alosa the second she began her narration. The most concise way to describe her is that she is everything Celaena Sardothien purported to be. While Alosa is not an assassin, she is a pirate and a good one at that. She can kill a man without any hesitation or guilt (and does, in the first chapter) and thieves with the best of them. She is also clever and witty with just the right amount of sass. In fact, one of the first humorous observations she offers comes when the first mate of the Night Farer is watching her as though he “expects [her] to react violently” and Alosa tells us, “Well, of course I’m going to react violently, but why should he expect that already?” She comes up with amazing schemes, always at least two steps ahead of everyone. She’s a gifted liar and manipulator, able to play any part she needs in order to get what she wants. She is also physically strong and a gifted fighter. She also likes traditionally “girly” things, like pretty clothes and hair. And, perhaps most importantly, she is a morally gray antihero. She’s not in the pirating game to tear it down from within or to do some other righteous thing. Her entire goal in this book is to steal from another pirate crew. She is out for herself and her crew. I love her with my entire soul.

But Alosa is not the only character I loved. I also enjoyed Riden, the first mate of the Night Farer and Alosa’s interrogator/love interest. He secretly loathes being a pirate, although he is a very good one. He is loyal to those who he cares about. And he is clever and witty in his own right. He’s also a neat freak. He was a great foil to Alosa. There were also some great side characters, including Kearan and Enwen. Kearan is lazy and apathetic. He’s always got a drink in his hand. But he’s also not afraid to poke fun at people who deserve it. Plus, he’s an excellent navigator. Enwen is strangely pure for the ship thief. There’s a genuine sweetness to him, along with some very sticky fingers. He’s also very superstitious and gullible. He presents a dim façade, but every once in a while you can tell that he is actually pretty wise. There were, unfortunately, not many female characters in the forefront in this book. However, because the characters we had were good characters, it didn’t hinder the story. And I think this will change in the sequel, as Alosa’s crew is predominantly women.

Next let’s talk about the ships. Technically speaking, there was only one, as the other was something only hinted at for the future. The only real ship in this book was Alosa and Riden. I really liked their dynamic and the way they progressed. Each person’s reaction to the situation felt authentic and never forced. For much of the book, Alosa is merely attracted to him. She grows to respect him in some ways and even care about him deep down, but she has yet to fully acknowledge and explore what those feelings might mean. And this makes perfect sense for her character. Meanwhile, we actually watch as Riden slowly falls for Alosa. Given his softer nature, it makes sense that he’d be quicker to fall. Alosa, however, never realizes the true extent of his feelings. This is further reflected when Riden tells Alosa he trusts her and Alosa thinks about how he really shouldn’t and that it’s stupid that he does. Furthermore, their banter was On. Point. They had an excellent back and forth. Each one always had a comeback for the other or a snarky remark to offer. It was truly delightful. And I’m not going to lie. Their make out sessions (though few and far between) were pretty hot. Just saying.

Now on to the next aspect: plot. This plot was overall very good. Despite knowing how good a pirate Alosa is, the stakes still feel real. Whenever there comes a point where it seems like she’s invincible, something happens to remind us and her that she has vulnerabilities too. It also wasn’t bogged down by a bunch of technical sailing jargon. We hear a little, but the story doesn’t require us to know too much detail about how sailing works. We go in already under the assumption that the pirates have at least this much down and we won’t need to know more for plot relevance. The story kept me enthralled and I was always excited to keep reading.

As for diversity, I have to say there isn’t much. There is a gay character, but he is a villain so he doesn’t count for much. But I will be damned if Alosa is not bisexual. She describes Riden, who we know her to be attracted to, admiringly and in great detail. But then later on in the book, she waxes poetic about her first mate Niridia. Alosa Kalligan is bisexual and I will not accept otherwise.

Besides the lack of diversity, the only other complaints I had were certain plot points and the way the magic system was introduced. Sometimes Alosa would reveal to the reader something she had planned because she knew something else was going to happen, but we had no warning ahead of time. It worked some of the time, but other times it seemed too convenient. Also, something happens in the last third of the book that came out of nowhere. I would’ve liked more foreshadowing or things I could look back on and realize their significance. The magic system is fairly simple. There is talk of sirens from the beginning of the book and they are accepted as real in this world. But further developments came without warning. They were explained after, but again, I would’ve liked more clues. We only get one, but it’s not really much of a clue.

All in all, however, I thought this book was excellent. The characters are endearing, the ships make sense, and the plot kicks ass. I am really loving this new budding trend in YA of having morally gray characters we still root for. The writing was great and Levenseller had a great handle on Alosa’s voice. I absolutely cannot wait for the sequel. I’m still not the biggest fan of pirates, but this book has a permanent place in my heart. It plundered my soul and, here among the wreckage, I am glad for the surprise.

3 thoughts on “Avast Ye Pirate Fans!: Review of “Daughter of the Pirate King” by Tricia Levenseller”