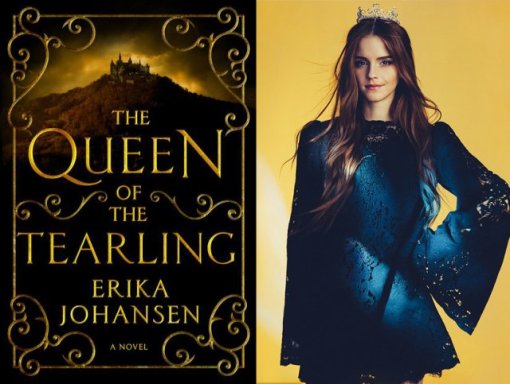 Back in 2014 upon the release of Erika Johansen’s The Queen of the Tearling, Emma Waston, Harry Potter director David Heyman, and Warner Brothers optioned the rights for a film. Ms. Watson was promptly signed on as both a producer and the lead, Tear Queen Kelsea Raleigh Glynn. Since then, the remainder of the trilogy has been released and the movie has been in development. As of 2016, plans were still to move forward with the film. I’ve just read the first book and have started the sequel, and I have problems with this casting. Emma Watson is the wrong person to play Kelsea.

As an actress, Emma is okay. She’s not great, but she’s not terrible either. But that’s not my main problem with her in this role. My issue with Emma Watson as Kelsea Glynn comes from a purely representation standpoint. Kelsea is at least curvy, at most fat. Emma is a thin, slender woman. This is direct erasure and borderline fatphobia. Seeing a fat woman become queen and do heroic things is incredibly important not only for fat girls, but for everyone. It shows that we are more than just the butt of jokes. We are capable of greatness as we are. Kelsea, furthermore, feels little shame about her body. She makes an offhand comment or two about being out of shape (which she actively tries to rectify), but never bemoans her weight. When a noblewoman gifts her with a dress that’s too small hoping to shame her, Kelsea ignores the slight and gives it to her accountant to be sold (later in the scene she makes the woman take the dress back and leave the Keep (her castle), after the woman disrespects her in other ways). Casting a thin woman as an unapologetically fat woman is a slap in the face. It says fat women are not worthy of being on screen as heroic leads. Kelsea, I know, wouldn’t stand for it.

In addition to being fat, Kelsea is unattractive. She tells us on multiple occasions that she is ugly. However, this isn’t mere insecurity. Another character, The Fetch, refers to her as “plain” and it’s often noted that men do not look at her the way they do other women. Some of this is due to a mix of fear and respect, but most of it is that she is simply not attractive. Emma, as anyone with eyes can see, is very pretty. So, again, we get that underhanded notion that ugly girls aren’t worthy of being portrayed as heroes. Only beautiful women can be heroines. With this notion reinforced in so much literature and television, it’s hard not to feel rejected if you’re unattractive.

And I’m not saying Kelsea is “not like other girls.” I’m saying their differences balance each other out and enhance their relationships. They can even teach each other a thing or two (one woman even tells Kelsea beauty can be a curse, as many of them were forced into prostitution due to it). Even though it may seem like a small thing, Kelsea’s relationships with these woman are important and I’d hate to see how they’ll suffer if this is altered.

Tangentially, Kelsea is nineteen-years-old and Emma is nearly ten years older. There’s such a problem in Hollywood of people who are nearly thirty-years-old playing teenagers. It causes so much body dysmorphia in teenagers, wanting to look like the teenage characters on television and in movies even though they’re played by grown adults. Not only is it damaging, it simply doesn’t make any sense. The further you get from your teenage years, the harder it is to connect to teenagers. It will make for a performance that’s disconnected at best.

Ultimately, I hope Emma Watson chooses to do what Selena Gomez did with 13 Reasons Why: remain a producer, but cast someone else for the lead role. It worked well for the Jay Asher adaptation, and I think it would be beneficial here as well (and more realistic). But I’m just one voice among many, talking about a movie that’s been “in development” for three years. And I’m waiting for a True Queen.