You all know my tale of woe. I didn’t watch many movies in 2017. And yet, I still watched enough to make a worst, disappointing, and best list. Today, we wrap up my 2017 movie journey with the top five best movies of the year. As usual, in order to qualify, I simply had to have seen the film for the first time this year. This will exclude some critically acclaimed films you may expect to see, but they probably wouldn’t have made the list anyway because I don’t love a lot of movies. And so, without any further ado, here are the five movies that really resonated with me this year:

If all superhero movies were like this, I’d watch a lot more of them. It was hilarious. Wade Wilson’s character arc works really well for him. If it were anyone else, I would call his motivations flimsy at best. But for an antihero like Deadpool, they make perfect sense. Everything about this movie worked for me, from the fourth wall breaks to the humor to the revenge plot. Even the romance made sense. I don’t know what took me so long to finally watch this movie, but I’m so glad I did. I can’t wait for the sequel. 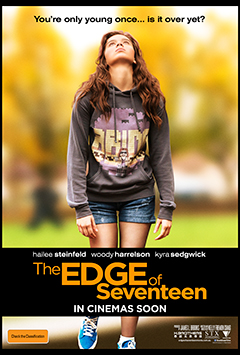 I’ve never had much of an interest in coming-of-age stories, but this one looked funny so I gave it a chance. While it’s not, strictly speaking, a comedy, the humor that is used is on point. Moreover, I related a lot to Nadine. She struggles with depression and learns to cope. It’s such a beautiful story and I value each of her relationships. The best thing about this movie, in my opinion, is that it’s not all wrapped up in the end. It ends on a hopeful note, but Nadine still has a lot of relationship mending and growing to do. It’s a wonderful story and easily one of Hailee Steinfeld’s best roles.

Here is my obligatory Critically Acclaimed pick, but for good reason. Jordan Peele’s magnum opus shines a light on a racist system in which white people benefit from the abuse of black people. The metaphor is ingenious, a horror movie disguising a painful truth. On top of that, it’s incredibly well-acted. Whether or not you agree with the categories it’s nominated in, you have to acknowledge it deserves every Oscar it can get. A remarkable film from a remarkable brain.

Once again, I must acknowledge my bias. I love pretty much everything Demi Lovato does. But even non-fans were raving about this documentary, so I feel justified in including it. This YouTube film gives powerful insight into Demi’s journey and her life now, as well as a rare look into the album-making process. Demi’s revelations are shocking and her insights are valuable. Honestly, I’m so glad she made this documentary. It really reminded me of why I love her so much, and now it’s shown everyone else why too.

I loved this movie. Sure, I had some problems with it, but overall it was entertaining and enjoyable. Poe really came into his own in this movie and wound up being my new favorite character. There was some great humor, as well as some really heart-wrenching scenes. The action was great, the plot engaging, and most of the character arcs well-written. It was also well-acted. I’m so excited to see how this story wraps up. 2019 can’t come soon enough.

Do you agree with any of my picks? What were the best movies you saw this year? Tell me about them in the comments!