While I’ve watched a lot of television this year, I didn’t finish every show I started. I have a bad habit of starting shows, taking a break from them, and then never going back. This year, I have done that several times in favor of just watching It’s Always Sunny in Philadelphia again (I’m on my third watch this year!). Sure, some shows I mean to keep in the past. But not these five. These are shows I plan to continue on with. Eventually. I hope. Call this post me holding me accountable. Here’s hoping that 2018 brings me the motivation to catch up on these great shows:

I love Jessica Jones and really want to watch The Defenders, but first I have to watch this (and Luke Cage (fuck Iron Fist)). I got about halfway through the first season when I decided to take a break. It’s a really heavy show and I needed a little room to breathe. The problem is I’ve been breathing for months and still have yet to get back to this. Whoops. I’m really hoping to get my shit together in 2018, especially since we’ll be getting season two of Jessica Jones which will undoubtedly involve repercussions from The Defenders. I’ll try to make this my winter project, but I make no guarantees. Not even to myself.

I’ve seen lots of screencaps from this show on Tumblr and knew it was something I needed in my life. When I actually sat down and watched it, I realized I should’ve had it in my life much sooner. A musical comedy? Yes please! The problem was I got my wires crossed and thought a character was in this show when they were really in Unbreakable Kimmy Schmidt. So, I paused this show to watch that. But I fully intend to get back to this. I’m tired of the typical sitcom formula, so this is just what the doctor ordered. I just hope the prescription doesn’t expire. 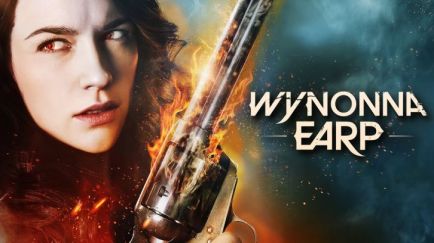 This show filled the void in my heart left behind by From Dusk Till Dawn. It’s not that it’s similar; it’s just got the same vibe. It also features a F/F relationship in the main cast. The problem is I started this show at the same time I started Always Sunny for the first time. I planned to watch both at the same time, alternating between the two. Instead, I went all-in on Sunny. I really want to get back to this show though. It looks really good. Any gay, Western fantasy is a-okay with me.

Remember how I said I paused Crazy Ex-Girlfriend to watch this show? Well, I also paused this one. Honestly, this show was better than I thought it would be. I just didn’t feel like getting invested in a new show when I started it. But this is definitely another one I absolutely will get back to. I went into this for Titus, and I’m sticking around for Kimmy. And Titus.

I actually watched the entire first season of this show, but nothing beyond that. Granted, that’s only three episodes, but still. I really like how weird and unique it is. It takes a very pointed look at our society and criticizes the hell out of it. I’m really excited to continue, especially the episode “San Junipero.” This is definitely one I’ll get back to in 2018.

Have you seen any of these shows? What are some shows you’ve been meaning to finish? Tell me about them in the comments!