I’ve been very fortunate this year to have gotten to see many live shows, whether concerts or musicals. I wanted to take a look back at these shows and discuss which ones I thought were amazing… and which ones I wish I never saw.

The only restrictions for this list is that the show had to have been one I saw live and in person. This excludes any live television performances or YouTube videos. However, it allows me to include both concerts and stage shows.

You get the jist. Now let’s get into the nitty gritty and find out which shows were hits and which were misses:

I saw this band at a music festival back in June, and holy hell were they bad. I suppose their Latin-infused alternative sound appeals to someone, but it sure as shit wasn’t me. I remember this show through the veil of a fever dream or a nightmare. They ended their set with a terrifying laugh, one that chilled me to the bone and haunts me to this day. If you could erase memories, I would absolutely be eliminating this one.

Have you ever seen fans of a band look at each other with disappointment during said band’s set? This was happening all through the crowd when these guys played at Firefly this year. I only knew one song of theirs, so I may have written off my disinterest as unfamiliarity. These fans proved to me the issue was far deeper than that.

When they weren’t giving a half-assed performance, the lead singer was going on and on about how great Gatorade is. Were they a sponsor? I don’t see how. Dude just really thought that was good banter. The next time you hear crickets chirp, take a look around and make sure you didn’t accidentally wander into the silent audience at an MGMT show.

I wanted to like this band, but I felt disinterested and checked out during their whole set. This band’s big sin is being completely unmemorable. I remember seeing them from the lawn and hearing them play, but I couldn’t tell you a single thing about the show itself. There was simply no connection with the audience. I always hope to come home with new favorites when I attend festivals, but this band didn’t even leave a mark on my psyche. Much like middle children of families, this band was outshone by the performers both before and after them. 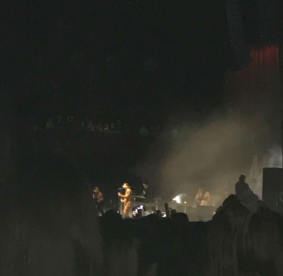 This one hurts, because I love this band. They genuinely do not have a bad album. Unfortunately, their artistic prowess does not translate into a dynamic performance. Their set was incredibly boring. Alex Turner didn’t interact with the audience at all, and hardly even moved. He just stood there singing, as though merely going through the motions.

One might assume they didn’t want to be there, but they were the only act to come back out for an encore performance. I couldn’t bring myself to stay. The apathetic vibe may have worked on Tranquility Base Hotel & Casino, but it has no place on a stage. 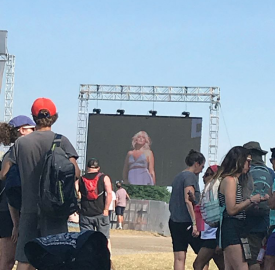 I’ve liked a couple Betty Who songs over the years, so it was with mild interest I dragged my friends to her show. I regretted it for every second she was on stage. Weirdly, the show itself wasn’t bad. It’s that it felt wildly out of place. What is a B-list pop star doing at a festival known for alternative music, dancing poorly choreographed numbers? Even as pop performances go, this was generic and safe.

2018 was actually Betty’s second time performing at Firefly. The first time Rolling Stone or Billboard (I can’t remember which) placed her set at number four on their list of the top ten best performances at Firefly that year. During her set, Betty declared she wanted to be number one this time. This somehow made me root against her. It’s not that she’s an ambitious woman— that’s incredibly admirable. It’s that she so blatantly did not deserve it. I was embarrassed to be the reason my friends were witnessing this.

I never bothered to look up the list for 2018, so I don’t know where she placed. But her mediocre dance party sure didn’t make number one. The only thing it did was make me apologize to my friends.

I know, I’m biased. I can acknowledge that. But I’ve seen Demi live twice (three times if you count when she opened for the Jonas Brothers) and, as much as I love her, this is the first show of hers I truly consider to be a phenomenal production. Sure, she always sounds amazing, but this show was on a whole other level.

For starters, her vocals are better than ever. She sounds just as amazing live as she does on the album. The set design was also great. My personal favorite is the bed set. Her costumes were sexy. The choreography was brilliant. What’s more, Demi really seemed to be having fun. It was great seeing her play instruments again, as she rarely does for television performances.

But it wasn’t just Demi who made this show great. Kehlani’s set turned me into a fan and DJ Khaled got me pumped. I could go on and on about how great this show was, and I have. Instead, I’ll just say this: Demi, I loved your show.

I was expecting to enjoy this show, but I didn’t know I would love it quite as much as I did. Christina is as much of a legendary diva as ever, her incredible vocals at their peak. The set design was gorgeous, as were her costumes. I really appreciated that she honored every one of her eras, playing music from each album. I fell in love with her all over again, feeling eight-years-old again and discovering her for the first time.

Christina is so personable and humble. She really reminded me of how she has inspired me so much over the years. From the preteen girl trying to pretend she didn’t have a same-sex crush to the adult woman just looking for a night of fun, Christina Aguilera’s amazing show truly liberated every part of me.

While some performances at Firefly 2018 were disappointing, The Killers put on perhaps one of the best concerts I’ve ever seen. I can’t believe I got to see it from the front row (General Admission FTW, woo woo!). Brandon Flowers was born to be a front man. He was engaging and personable, putting on a dynamic performance. You could feel the entire band’s excitement to be there, even though they’d played Firefly before.

They also seemed to appreciate the fact that they were at a music festival, so not everybody would know their album tracks (though they definitely noticed which side was filled with Killers fans— mine!). They played all their hits, ending the show on the highest note. Three guesses what that song was.

Yes, it was “Mr. Brightside.” It was hilarious seeing the way the security guards tensed the second those first chords began and the audience went wild. I think this show was genuinely one of the greatest experiences of my life. After all, it’s pretty damn killer when Brandon Flowers looks at you with his own two eyes and smiles. 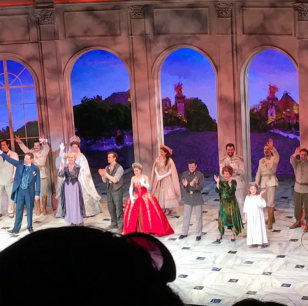 This spring, I was lucky enough to get to tag along on a field trip to New York City with students from the school at which my mom works. Though we got to experience other famous attractions of NYC (i.e. Time’s Square), the main reason for our trip was to see Broadway’s latest hit, Anastasia. This was my first time seeing a show on Broadway (but not my first live musical) and it was everything I’d hoped it would be.

The music was fantastic, the performances were brilliant, and the costume and set design were wonderful. I really liked how this version of the show takes some beats (and songs!) from the 1997 animated classic, but tells the story from a more historical perspective. I have listened to this cast recording more than any other this year. In fact, this show just may be threatening Wicked’s long-held place as my favorite musical. I wish I could take a journey to the past and see this show again.

There were a lot of things I enjoyed about my trip to Vegas, but one of the highlights was definitely this concert. Thanks to my aunt and uncle’s generosity, my friend Ciara and I got to see them from our front row position in the General Admission area. What can I say? The boys have still got it. Each member of the group took the time to interact with the audience. I even got to touch Kevin’s hand!

They performed all their big hits, from way back in the ‘90s all the way to today. They sang, they danced, and they made a grown woman feel like a little girl again. I also fell head over heels for one of their dancers. Since it was Halloween, the guys performed their encore in Halloween costumes. It was awesome! I’ve waited my whole life to see them, and now I can finally confirm that they are, in fact, larger than life.

Did you see any live shows this year? Which ones were the best? What about the worst? Tell me about them in the comments!

I’ve recently become an Amazon Affiliate! If you’d like to help me continue to post consistent content, check out the link below! I recently read Muse of Nightmares by Laini Taylor and loved it. If you liked Strange the Dreamer or want to give the duology a try, just follow that link.