I have to say, January was a pretty good reading month for me. I read six books and rated most of them at least four stars. In fact, I think I read not one but two books that will make my best list this year. Unfortunately, I also read a book that will be on my worst list.

But enough preamble. It’s time to discuss all the books I read in January.

Richard Mayhew is a young man living in London. One day, he stops to help an injured girl and his life changes forever.

In order to return his life to normal, Richard must join the Lady Door on her quest to avenge her family. With infamous conman the Marquis de Carabas and notorious monster slayer Hunter on their side, Richard and Door’s journey through London Below should be a piece of cake. But they’re being hunted and treachery is afoot. Nothing is as it seems.

You know those books that latch right onto your soul and feel like they’re a part of you? Yeah, that’s this book. I’m so in love with it. It’s beautifully-written, an exquisite tapestry of metaphor and introspection. The world-building is phenomenal. The characters are wonderful. Everything about this book is fantastic.

Gaiman set out to write a portal fantasy for adults, a story world that makes the reader feel as they did when they read The Chronicles of Narnia and Alice’s Adventures in Wonderland as kids. I am so happy to report that he succeeded. Although, if I had to compare the atmosphere of this book to anything it would be Shades of Magic by V.E. Schwab (though Neverwhere came out almost two decades prior).

Gaiman’s humor shines through his writing. Sometimes it’s the narration that gets you, others it’s a character (usually Richard). But it never overtakes the heart of the story. Gaiman finds a perfect balance between humor and raw human emotion.

The world-building is so well-done. Not only that, but it’s unique. The same can be said of the character development. I also appreciate that all the relationships (aside from that with Richard’s ex-fiancé) remain solely within the realm of friendship. There are suggestions that Richard and Door’s relationship could turn into more, but for now they’re happy with just being friends. Not enough stories embrace the importance of platonic relationships. I am so happy this one does.

I could genuinely go on and on about how much I love this book. I am certain this is going to be the book I won’t shut up about all year long. It’ll easily make my year-end best list. I adore this book with everything in me. Obviously, I gave it five stars.

For ten years, Abby Williams has run from her small town past. Now she’s a big shot environmental lawyer in Chicago. Abby’s facade begins to crack when a new case brings her back to Barrens, Indiana and the life she’d thought she left behind.

As she investigates the practices of the town’s main economic source, Optimal Plastics, Abby starts finding connections to a ten-year old scandal involving the popular Kaycee Mitchell and her friends— a scandal that lead to Kaycee disappearing for good.

But exposing Optimal may threaten the livelihoods of Barrens’ citizens. And Barrens will do anything to bury the dark secrets it has been hiding— including kill.

Whenever I read a book by a celebrity, I always go in with low expectations. Sure, many of them have ghostwriters. But you never know which ones do. So, I expect little and hope to be pleasantly surprised.

The writing in this book is actually phenomenal. Ritter has a flair for language and description. She’s also surprisingly deft at metaphor. She has an incredibly strong voice that suggests she can really hold her own amongst learned novelists.

Unfortunately, that’s where the positives end (well, aside from the fact that my copy is signed). These characters are annoying and unbearable. Everything about their characterization feels so heavy-handed. Abby is constantly talking about how much she hates Barrens, but how she’s still in its grip anyway.

Abby reads like a teenager, despite the fact that she’s in her late twenties. You’d think she’d let some of these things go, but she’s still very bitter about how unpopular she was in high school. She views her years as a victim of bullying as fresh, rather than things that happened ten years ago. (And that’s without getting into the love triangle and Abby’s tendency to focus on the guy(s) she likes at the most inopportune of times.)

The suspects are pointedly suspicious. Abby never wastes a second before reminding us again how awful they were in high school and how shady they are now. They have no characterization outside Abby’s opinions of them.

And then there’s the mystery. The way everything comes together in the end is absolutely ridiculous. I lost my suspension of disbelief. I hate the twist so much. I hate seeing Abby vindicated. I hate everything.

I really wanted to love this book. Don’t Trust the B—- in Apartment 23 is one of my favorite shows. I also love Jessica Jones. Ritter is a fabulous actress. But alas, she is not multi-talented. Everyone is right— this book should be thrown into a bonfire. Unfortunately, it will probably wind up on my worst list. I gave it one star. 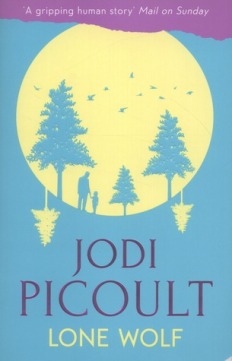 One winter night, Cara and her father Luke get into a terrible car accident that leaves Luke comatose. The broken family must now come together and decide whether or not to pull the plug on their father. But Cara and her estranged brother Edward both have secrets, and the battle over whether their father should live or die will bring them all to light. What will the family decide? And will they be able to live with each other after the truth comes out?

This is another slam dunk for Jodi Picoult. She really knows how to get the reader to consider moral and ethical dilemmas from different standpoints.

My only complaint would be some of the characters and their decisions. Well, mainly just Cara. She really irritated me, especially the way she willingly throws her own brother under the bus again and again. I know she’s only seventeen and is dealing with a lot, but I just really hated her. But I could also be biased because I really loved Edward.

Anyway, great book. I’m finally almost caught up with all Picoult’s published works. Two more to go! As for this one, I gave it four stars.

The Gilded Wolves by Roshani Chokshi

The story follows Séverin Montagnet-Alarie, a gifted treasure hunter and hotelier in late 19th Century Paris. When the Order of Babel asks for his help, he is offered his true inheritance as recompense.

To find the artifact the Order needs, Séverin puts together a team. Séverin, an engineer, a historian, a dancer, and a brother must use their knowledge to find this artifact and solve their own problems along the way.

I’m not sure what it is that kept me from absolutely loving this book. Well, no. That’s a lie. I had a lot of trouble in growing to love these characters.

I did eventually grow to like them, but I can’t help but see them as cheap imitations of characters from Six of Crows. Maybe that’s just a me thing and I’m bringing my own baggage to the table. But I just couldn’t shake that feeling.

Even worse, these characters each have one or two traits and aren’t really fleshed out. I felt like I was reading about archetypes and not actual characters those archetypes were meant to build.

This is a largely plot-driven story, so it takes the characters some time to find their groove. Once they do, I fell for them. But it took a while.

I’m hoping the sequel will be better. Chokshi’s prior duology was one in which the second was a vast improvement on the first. I see no reason why this series can’t be the same.

Overall, this is a pretty decent book whose climax and resolution really save the story and allow these characters to grow. If you’re interested in hearing more of my thoughts, check out my review. I’m definitely down to read the next one, though I’m not anticipating it the way I did this one. But I gave this one 3.75 stars.

Ace of Shades by Amanda Foody 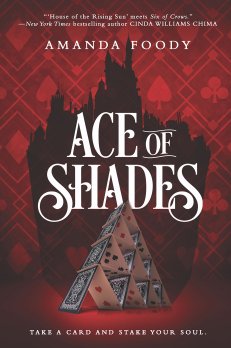 After her mother goes missing, proper young lady Enne Salta travels to the infamous City of Sin, New Reynes. She only has one lead: street lord and con man, Levi Glaisyer. But Levi has problems of his own, bound to a powerful mafia donna and trapped in a familing scam. Enne’s offer of compensation for his help could be the answer to his problems.

As the two investigate Enne’s mother’s disappearance, they uncover terrible and impossible secrets. And these secrets could very well spell their doom.

This book was so good. Everything from the characters to the plot to the world was fantastic. My only complaints are the substitute swear words and a supremely dumb choice one of the main characters makes toward the end of the book. Everything else is amazing. I can’t wait to read the sequel! I gave this one five stars.

King of Scars by Leigh Bardugo

Post-war Ravka is vulnerable and, as king, Nikolai Lantsov is willing to do anything to protect his people. With a team of allies, he travels to the far corners or Ravka to find the powerful magic he needs to vanquish his enemies— and get rid of the dark curse plaguing his soul. But not all wounds can be healed, and Nikolai may be in for more than he bargained.

This book was absolutely worth four years of anticipation. I love these characters, I love this plot, I love the themes, and I love the writing. I really like how flawed each of these characters are. But they’re not just flawed, they’re self-aware. The character arcs are both beautiful and heartbreaking.

The plot is fairly slow, especially at the beginning. I love slow-paced books, so this worked well for me. Plus, I’m actually concerned for the fate of Ravka and the persecuted Grisha. Bardugo has become a pro at balancing character introspection, dialogue, and action.

Thematically, King of Scars explores what makes a monster and what makes a human. It also discusses control and awareness. Can we take control of our demons? How much do they drive our actions? It’s a fascinating dissection of humanity with no clear-cut answer.

Much like with Neverwhere, I could go on and on about how much I love this book. If you’d like to hear me do so, check out my review. I am desperate for the next book. I gave King of Scars a well-deserved five stars and fully expect it to make my best list this year.

What did you read in January? Tell me about it in the comments!

If you’d like to help me continue to post consistent content, check out my Amazon Affiliate link below! Today’s product is King of Scars by Leigh Bardugo. It’s the first book in the Nikolai duology and it’s fantastic! Grab your copy now! Even if you don’t buy it, I still get credit when you use my link to shop on Amazon.