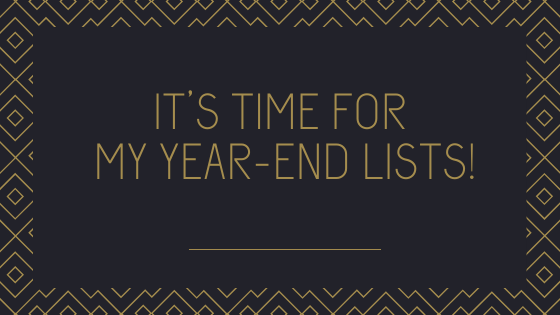 That’s right, everyone! It’s time for everyone to roll out their best and worst lists of 2019. I look forward to these lists every year. There’s just something so cathartic about the rants and something so moving about the raves.

In the past, I’ve done Best, Worst, and Most Disappointing lists for books, albums, movies, and TV shows. This year I’m going to change that. Why? Because there aren’t many albums, movies, or TV shows that I disliked. I had fairly good experiences with all my auditory and visual media this year.

Therefore, I’ll instead be doing a Favorites list for albums, movies, and shows. I’ll tell you what music releases, shows, and movies I really dug in 2019. The only requirements to make each list is that I listened to or watched said project for the first time in 2019. I’m really excited to tell you guys about all the things I loved in 2019.

I’ll be handling my year-end book lists a bit different too. I’ll still be doing a Best List, but I’m going to combine my Worst and Most Disappointing lists. This is because I haven’t read too many books I think are deserving of being called the Worst of the Year.

However, I won’t be posting my Best and Worst/Most Disappointing Books until January. I want to give myself until the very end of the year to find books to add to either list. My favorites lists will start going up during the next week, along with a couple more Bookending Winter posts and my final Music of the Month of 2019.

I know this isn’t a super exciting post, but I thought I’d let you all know what my plans are for year-end list season since they’re changing so much this year. I’ll see you tomorrow with either one final book review or one of my first lists of favorites!