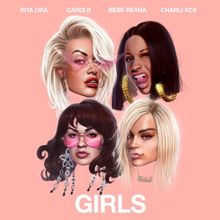 Look, I don’t pretend to be an expert on WLW culture or values. I only figured out I’m a lesbian six months ago. When it comes to a lot of our hot button issues, I haven’t yet entered my dog in that race. I know how I feel when I feel it, and that’s it. And the most I can do is explain how I feel. And how I feel about the song “Girls” by Rita Ora, Charli XCX, Bebe Rexha, and Cardi B is… conflicted.

When the song first came out, I was stringently against it. I felt fetishized by a bunch of straight girls trying to be edgy. Like they were fueling the male gaze. Like they were trivializing my experience. I thought it relied too strongly on stereotypes, rather than genuine experience. It didn’t help that people claimed Rita Ora called the song a “bisexual anthem” (the actual quote is: “I always looked at this song as a real gender-fluid freedom record.”). Not to mention the fact that Cardi B has a history of using lesbophobic slurs (and during a professional interview, no less). I wholeheartedly agreed with Hayley Kiyoko’s statement on the matter. This song was tone-deaf and an insult.

But then more information started to come out. As it turns out, Rita Ora is openly bisexual and was writing about personal experiences. Cardi says she “likes vagina,” though she would never date a woman. The jury’s still out on Charli XCX and Bebe Rexha as far as I know, but hey, it’s 2018. Everybody’s becoming more sexually free. They could very well like girls too.

But then came the sticking point: the song implies they need to drink in order to hook up with other girls (“Red wine”/I just wanna kiss girls”). If this is a pride song, why would this be necessary? At first I placed the issue on framing. If the implication was that these ladies were only just starting to feel comfortable kissing girls but needed a little liquid courage, I’d have understood that. But, of course, that’s not what’s being said here.

And then it occurred to me, perhaps Rita and Co. aren’t event saying they need to drink in order to kiss girls. Maybe it’s just… part of the atmosphere they’re trying to create. It’s a loose, fun party environment. Besides, how can I fault Rita for singing about a personal experience like this when I’ve defended Demi Lovato’s “Cool for the Summer” for years? At least both songs are written and sung by actual Sapphic ladies. I’d be a hypocrite if I didn’t give Rita that same benefit of the doubt.

Moreover, is it really so terrible if girls want to sing about kissing other girls, even if they’re straight? Sure, when Katy Perry does it, it feels like it was Done for the Controversy™, but does it really matter at the end of the day? No one thinks Katy Perry represents Sapphic women because we know Katy is not Sapphic. Plus… what bad thing are songs like this even saying? That it’s fun kissing girls? That’s not controversial or offensive, that’s just true. It’s not like they say anything derogatory. They’re just fun songs about girls hooking up with girls, whatever the reason.

And yet, I still don’t feel totally comfy with “Girls” and I don’t know why. Am I just conditioned to be against it because of what others have said? Or is it something more? I think part of the reason is that songs about girls hooking up with girls get popular, but songs about girls falling in love with girls don’t. As if all we are is sexy hookups. But that’s not Rita Ora’s fault. Or Katy Perry’s. Or Demi Lovato’s. Why should we tell them they can’t sing about this just because certain people misconstrue it? And why should we minimize their experiences just because it’s not always what we want to hear on the radio? Why do we take it so seriously?

Ultimately, the only conclusion I can come to about this song is that I don’t have a conclusion. My feelings for “Girls” remain extremely mixed. And that’s the best take I can give you. But you know what? I think it’s the best take out there. I’ve considered all sides and landed everywhere. I’m not asking you to love the song. I’m just asking you to reconsider how you feel about it— whether you’re for it or against it. After all, LGBT+ women are not a monolith. So why should our views regarding pertinent issues be so black and white?

One thought on “Rita Ora’s “Girls”: An Insensitive Act of Fetishization or Innocent Act of Personal Expression?”