Bookending Summer is an event hosted by Sam of Fictionally Sam and Clo of Book Dragons in which book bloggers from all over get together to discuss books using summer themes. There are lots of great prompts I’m excited to respond to.

Today’s prompt is brought to you by Rachel of The Must Reads.

Sometimes you read a popular book and instantly fall head over heels. Not only does it deserve all the hype, but now you’ve boarded the Hype Train™ yourself. This recently happened to me Red, White, and Royal Blue by Casey McQuiston. Perfect example of a book that lives up to the hype.

Other times, woof. Popular books you can’t get into aren’t always awful, sometimes they’re just meh. Which, if you ask me, is a lot worse than being terrible. At least bad books make you feel something. At least they stick in your mind. At least you share some sort of passion for those books with the people who love them.

But books you just can’t get into? Those are tough. They’re painful to read. And that’s why they either become DNFs or books you completely forget you ever read. All the books on my list are DNFs. Not all of them are bad, but all them fill me with apathy.

These are the books I just couldn’t get into.

This is a book about an annoying protagonist who is bullied and almost drowned by her supposed love interest. And his reasons for doing so? Because her brother doesn’t beat her, her adoptive father loves her, and he has feelings for her that he doesn’t want to have. I mean, what the fuck?

However, I also just didn’t see anything special about the rest of the story. The writing is average, the plot is average, and the characters are average. This book is just another generic young adult fantasy.

I flipped ahead in the book and read future scenes (including the infamous knife-to-the-throat kissing scene) and nothing about it made me want to read to find out how things got to that point. I read an entire plot summary for this book and the sequel and didn’t find any of the events interesting at all.

So yeah, I still don’t get the hype. This book is just yet another disappointing novel about the fae. But someday I’ll find a quality fae story… someday.

There’s nothing wrong with this book. It’s just so vastly far beneath my reading level, I found it difficult to get into. I’ve heard nothing but good things about this book— and really, it should be right up my alley— but it just wasn’t for me.

And this is really dumb but… I really hated the characters’ names. No offense if your name is Millie or Flora, but like… they’re not good names. And it was really throwing me off that the Scottish princess had such an un-Scottish name.

Some reviewers on Goodreads—namely, Scottish reviewers—pointed out that Hawkins’ Scotland isn’t very Scottish at all. Maybe I was picking up on that. Or maybe it was just the name thing. Either way, this book wasn’t for me.

I tried several times to read The Darkest Minds and just couldn’t do it. I have tried on several occasions to read the first book and even made it about halfway through, but reading it felt like a chore. I didn’t feel connected to the characters, the plot was going nowhere, and I didn’t care for the writing style. I wanted to like this book and I sort of saw the appeal, but I just don’t feel about it the way everyone else seems to feel about it.

Not to mention, I got spoiled for a character death in the third book. I’m not going to say who, but the way it happens is so horrific, I really didn’t want to read that. I also didn’t want to work to read a series in an effort to grow to like a character I knew was going to die a torturous, excruciating death anyway. I finally just had to DNF this series and be done with it. 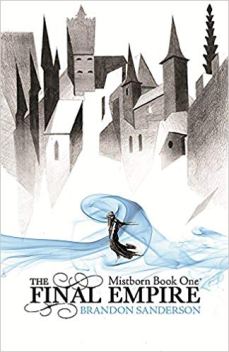 Maybe I read this before I was ready for adult fantasy, but I really didn’t care about the characters and the pacing didn’t work for the story. At least, that’s how I felt at the time. It’s been a few years now, so I could potentially feel different now. I’ve thoroughly enjoyed a lot of adult fantasy. Maybe I’m ready.

However, Sanderson is one of those artists I can’t quite separate from their art. Back in 2017, I discovered blog posts written by Sanderson in which he reveals he is a giant homophobe. He is anti-same sex marriage and very closed-minded. He’s Mormon, so I’m not totally surprised. That’s par for the course. Sanderson has since altered his stance somewhat, but slightly less homophobic is still homophobic. And, as a lesbian and empathetic human being, that doesn’t sit well with me.

I started reading this book ten years ago and then set it aside to read something else. I meant to go back to it, and then didn’t. I remember I was mainly reading it because my mom bought it and wanted my opinion. What about it made me put it down? I don’t remember, but I’m pretty sure I was just straight up bored. And that’s the tea.

What are some popular books you couldn’t get into? Let’s discuss in the comments!

4 thoughts on “Bookending Summer: Popular Books I Couldn’t Get Into”