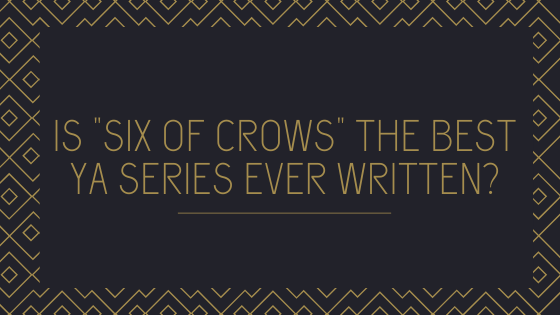 If you’ve spent any time in the online book community within the past few years, you’ve undoubtedly heard the phrase, “No mourners. No funerals.” Or maybe you’ve heard, “The heart is an arrow. It demands aim to land true.” Or perhaps, “My darling Inej, treasure of my heart, will you please do me the honor of acquiring me a new hat?”

Despite being less than five years old, the Six of Crows duology has cemented itself as a modern classic of YA literature. Even if you haven’t read Leigh Bardugo’s magnum opus, you know these characters. This series is a cultural phenomenon, at least in bookish circles.

I recently reread the series for the first time in a couple years and was struck with how fantastic it is. The characters, the relationships, the plot, the world— I love it all. I was so amazed I had to ask myself: is Six of Crows the best YA series ever written? Today I’m going to examine why the answer is yes.

The most important aspect of any book to me is the characters. In this series, Bardugo has crafted some of the most realistic and well-rounded characters I’ve ever read. They’re deeply flawed, and not just because they’re criminals. They each have complex emotional scars and moral compasses (“moral” used loosely here). What’s more, they have some of the most beautiful character arcs in all of YA. Even when the changes are subtle, they’re still substantial and sensible.

Kaz isn’t just a ruthless gangster— he’s a young man scarred and shaped by his past. He’s driven by a need for vengeance and will do whatever it takes to get it. And yet, hard as he tries, he can’t keep himself from caring for his friends.

Inej is wise beyond her years and believes in mercy, but that doesn’t mean she’s a “good guy.” She’s done what she needs to do to claw her way out from her traumatic past and has become a terrifying force to be reckoned with.

Nina is brash and headstrong, a little too ready to leap into danger. It’s what gets her into trouble, but it’s also what saves her and her friends. She’s somehow both a gifted actress and the most authentic member of the Dregs.

Wylan starts out the series scared out of his mind and driven by morality. By the end, he’s out to get justice for himself. He battles deep insecurities, but learns to appreciate his talents. He grows into who he is as a person, finally embracing his identity proudly.

Jesper follows a similar character arc, though he gets there in a different way. He’s afraid of what he can do and haunted by what he can’t. His desperation has led him down this path, but his determination will take him to his destination.

Matthias learns empathy and must face the horrors of his past. He begins the series believing he is morally superior to the Dregs, but realizes he is just as bad if not worse. He shifts his whole perspective, changing his goal to ending the prejudice in his people.

Because these characters are so well-rounded, their relationships are founded on a sense of realism. The build-up and development for each relationship is truly unparalleled. Kaz and Inej are both touch-averse and riddled with trauma, so it makes sense their relationship progress is slow. But, oh, is it filled with breathtaking quotes. Their trust in each other is so profound, I almost can’t breathe.

Wylan and Jesper have the most wholesome relationship, built on flirtation and friendship. They grow to appreciate each other and worry for each other. It’s no wonder they end the series in the most secure relationship.

Nina and Matthias are a controversial pair, due to Nina being a Grisha and Matthias being a Grisha hunter. I admit I have mixed feelings on it myself. And yet, they make it work. They are forced to work together and forced to learn to trust each other. In the end, they see each other as fundamentally good. Plus, their sexual tension is off the charts.

But it isn’t just the romantic relationships that are fantastic. The friendships are equally as beautiful. Inej and Nina love each other like sisters, while Kaz and Jesper fight like brothers. Inej and Jesper have cute inside jokes. Even Matthias grows to genuinely care for this ragtag group of street rats. Few series, YA or otherwise, prioritize friendship as much as Bardugo does in Six of Crows.

Let’s talk about the plot. The plot in Six of Crows is fairly standard. The Dregs attempt to pull off an impossible heist. Despite the actual heist not starting until midway into the book, Bardugo manages to keep the plot engaging and exciting.

But Crooked Kingdom— holy hell. That book is a heist inside a con inside a trick. There is so much going on at any given moment, and yet Bardugo has such a tight hold on all of it. She writes so many subplots into the main plots and weaves them together flawlessly. I’ve read this book multiple times and every time is like the first time. I don’t think I’ve ever read another series that handles plot this deftly.

The world-building in Six of Crows is obviously an offshoot of what was done in Shadow and Bone. However, this series focuses primarily on Kerch/Ketterdam and Fjerda. When I say that these books are beautifully dingy, it’s because Ketterdam comes alive. You really feel like you’re there, strolling the Barrel with these characters.

Bardugo expands upon the different countries and cultures in the Grishaverse. Sure, they’re all modeled after real-world countries, but she makes them her own. I feel like I learned more about Kerch, Fjerda, Novyi Zem, Shu-Han, and the Wandering Isle simply from the layers of world-building in this series than in the rest of the Grishaverse combined. I’ve never had such a firm grasp on an entire fictional world.

Which leads me to another thing that makes this series great: the diversity. Kaz is physically disabled and struggles with PTSD. Inej is Suli, a culture that seems to be a mix of South Asian cultures and Romani culture. She is also a survivor of sex trafficking. Nina is fat and bi or pansexual (Bardugo has said both). Jesper is black, bisexual, and has a gambling addiction. Wylan has a learning disability and is gay. Even better, Kaz’s disability is OwnVoices rep.

Granted, there has been criticism of the representation. This is mainly focused on the characters of color. For example, some critics say Bardugo is too vague regarding the inspiration for Inej’s race. Personally, I think all the representation is good but that’s just my opinion. And it all came before the big push for diversity in books that started in earnest in 2016.

Lastly, we have to talk about the writing. This is easily Bardugo’s best writing to date. Not only that, but it’s some of the best writing in YA. There’s a dismal beauty to Bardugo’s writing style, a far cry from even her own writing in Shadow and Bone. Her writing isn’t just a vehicle to get her story across— it’s a character all of its own.

Between her brilliant character work, her intricate plots, her immersive world-building, and so much more, Leigh Bardugo has easily crafted the best YA series of all time. That’s why it’s so beloved, why it’s one of the book community’s Holy Trinity of YA series. Because no one has ever written a YA series better than Six of Crows. And honestly? It’s giving a lot of adult series a run for their kruge as well.

Look, I can’t actually say conclusively that Six of Crows is the best YA series ever written. It’s all a matter of opinion. My opinion just happens to be correct. Just kidding. Mostly.

Sound off in the comments with your thoughts on Six of Crows! Do you agree with me? Disagree? Can’t decide? Let’s discuss!

2 thoughts on “Is “Six of Crows” the Best YA Series Ever Written?”