Most Anticipated Books is a monthly series in which I discuss the releases I’m most excited for in the coming month. This post is going up a bit later than usual, so half of this list actually comes out today. Whoops. I promise to be a better blogger from now on.

The God Game by Danny Tobey

Summary: You are invited! Come inside and play with G.O.D. Bring your friends! It’s fun! But remember the rules. Win and ALL YOUR DREAMS COME TRUE.™ Lose, you die!

With those words, Charlie and his friends enter the G.O.D. Game, a video game run by underground hackers and controlled by a mysterious AI that believes it’s God. Through their phone-screens and high-tech glasses, the teens’ realities blur with a virtual world of creeping vines, smoldering torches, runes, glyphs, gods, and mythical creatures. When they accomplish a mission, the game rewards them with expensive tech, revenge on high-school tormentors, and cash flowing from ATMs. Slaying a hydra and drawing a bloody pentagram as payment to a Greek god seem harmless at first. Fun even.

But then the threatening messages start. Worship me. Obey me. Complete a mission, however cruel, or the game reveals their secrets and crushes their dreams. Tasks that seemed harmless at first take on deadly consequences. Mysterious packages show up at their homes. Shadowy figures start following them, appearing around corners, attacking them in parking garages. Who else is playing this game, and how far will they go to win?

And what of the game’s first promise: win, win big, lose, you die? Dying in a virtual world doesn’t really mean death in real life— does it?

As Charlie and his friends try to find a way out of the game, they realize they’ve been manipulated into a bigger web they can’t escape: an AI that learned its cruelty from watching us.

God is always watching, and He says when the game is done.

My Impression: Though a similar concept has been done a few times before, I’m still really intrigued by this. It’s an especially sinister take on a familiar story. I was actually offered an ARC, but had to decline because I didn’t think I’d read it in time for a review.

Hal was once a knight, carefree and joyous, sworn to protect her future queen Banna Mora. But after a rebellion led by her own mother, Caleda, Hal is now the prince of Lionis, heir to the throne. The pressure of her crown and bloody memories of war plague her, as well as a need to shape her own destiny, no matter the cost.

Lady Hotspur, known as the Wolf of Aremoria for her temper and warcraft, never expected to be more than a weapon. She certainly never expected to fall in love with the fiery Hal or be blindsided by an angry Queen’s promise to remake the whole world in her own image— a plan Hotspur knows will lead to tragedy.

Banna Mora kept her life, but not her throne. Fleeing to Innis Lear to heal her heart and plot revenge, the stars and roots of Innis Lear will teach her that the only way to survive a burning world is to learn to breathe fire.

These three women, together or apart, are the ones who have the power to bring the once-powerful Aremoria back to life— or destroy it forever.

My Impression: I’m dying to read this because I love Shakespeare retellings. However, I’m not allowed to even buy it until I finish The Queens of Innis Lear. 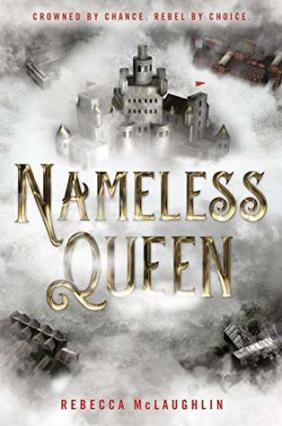 Summary: Everyone expected the king’s daughter would inherit the throne. No one expected me.

It shouldn’t even be possible. I’m Nameless, a class of citizens so disrespected, we don’t even get names. Heck, dozens of us have been going missing for months and no one seems to care.

But there’s no denying the tattoo emblazoned on my arm. I am queen. In a palace where the corridors are more dangerous the streets, though, how could I possibly rule? And what will become of the Nameless if I don’t?

My Impression: This will either be really good or painfully mediocre. But I’m willing to give it a chance.

The Night Country by Melissa Albert

Summary: In The Night Country, Alice Proserpine dives back into a menacing, mesmerizing world of dark fairy tales and hidden doors. Follow her and Ellery Finch as they learn the Hazel Wood was just the beginning, and that worlds die not with a whimper, but a bang.

With Finch’s help, Alice escaped the Hinterland and her reclusive grandmother’s dark legacy. Now she and the rest of the dregs of the fairy tale world have washed up in New York City, where Alice is trying to make a new, unmagical life. But something is stalking the Hinterland’s survivors― and she suspects their deaths may have a darker purpose. Meanwhile, in the winking out world of the Hinterland, Finch seeks his own adventure, and― if he can find it― a way back home…

My Impression: I really enjoyed The Hazel Wood, so I’m excited to check out the sequel.

Summary: Summer, 1518. A strange sickness sweeps through Strasbourg: women dance in the streets, some until they fall down dead. As rumors of witchcraft spread, suspicion turns toward Lavinia and her family, and Lavinia may have to do the unimaginable to save herself and everyone she loves.

Five centuries later, a pair of red shoes seal to Rosella Oliva’s feet, making her dance uncontrollably. They draw her toward a boy who knows the dancing fever’s history better than anyone: Emil, whose family was blamed for the fever five hundred years ago. But there’s more to what happened in 1518 than even Emil knows, and discovering the truth may decide whether Rosella survives the red shoes.

With McLemore’s signature lush prose, Dark and Deepest Red pairs the forbidding magic of a fairy tale with a modern story of passion and betrayal.

My Impression: I’ve been meaning to try McLemore’s books for a while, and I figure this is as good as any a place to start. Also, I’m obsessed with the very real history of dancing hysterias. It’ll be cool to read a fantasy based on them.

Summary: In a botched demonic extraction, they say the demon feels it ten times worse than the man. But they don’t die, and we do. Equilibrium.

The unnamed and morally questionable narrator is an exorcist with great follow-through and few doubts. His methods aren’t delicate but they’re undeniably effective: he’ll get the demon out— he just doesn’t particularly care what happens to the person.

Prosper of Schanz is a man of science, determined to raise the world’s first philosopher-king, reared according to the purest principles. Too bad he’s demonically possessed.

My Impression: I’ve heard nothing but good things about this book. Besides, demons and morally questionable protagonists are by bread and butter.

What January releases are you excited for? Let me know in the comments!