In a fit of gayness, I spent the first half of this month reading two books that promised girls in love. The first was Inkmistress, a prequel to Audrey Coulthurst’s debut novel Of Fire and Stars. The second was Becky Albertalli’s Simon vs. the Homo Sapiens Agenda spin-off/sequel, Leah on the Offbeat. I found both books to be overall pretty good… except for a fatal flaw that kept me from loving either of them. As such, I thought it would be apt to give them each a shared mini-review. And so, in the order I read them, here are my thoughts on Inkmistress and Leah on the Offbeat: 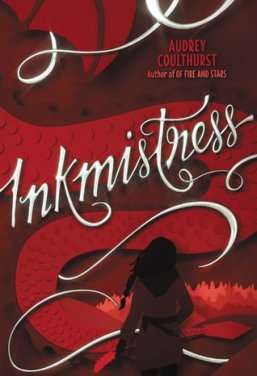 Official Summary: Asra is a demigod with a dangerous gift: the ability to dictate the future by writing with her blood. To keep her power secret, she leads a quiet life as a healer on a remote mountain, content to help the people in her care and spend time with Ina, the mortal girl she loves.

But Asra’s peaceful life is upended when bandits threaten Ina’s village and the king does nothing to help. Desperate to protect her people, Ina begs Asra for assistance in finding her manifest—the animal she’ll be able to change into as her rite of passage to adulthood. Asra uses her blood magic to help Ina, but her spell goes horribly wrong and the bandits destroy the village, killing Ina’s family.

Unaware that Asra is at fault, Ina swears revenge on the king and takes a savage dragon as her manifest. To stop her, Asra must embark on a journey across the kingdom, becoming a player in lethal games of power among assassins, gods, and even the king himself.

Most frightening of all, she discovers the dark secrets of her own mysterious history—and the terrible, powerful legacy she carries in her blood.

My Thoughts: If there’s one sure fire way of getting me to read your book, it’s using blood magic. There’s something so dark about it, I love it. However, that’s not the main reason I read this book. I read this book because the summary promises ladies in love and… that’s not really what we get. To say I was disappointed would be an understatement.

Now, before I get into this, there is nothing wrong with a bisexual girl dating a guy nor does it invalidate her bisexuality. My problem is that’s not what the summary promised. In fact, there’s not even any mention of the boy she falls for. And, make no mistake, the relationship build-up is fantastic. You can see why these two fall for each other. Moreover, Hal gives Asra the kind of love she deserves. I probably would’ve loved this ship if I’d known the book would turn that way. But, again, the summary only mentions Asra’s love for Ina.

Even though I still ultimately prefer Of Fire and Stars, this book has a far better plot and a more concrete central conflict. Though I found the plot twists predictable, I still enjoyed the ride getting to them. The characters are also great, their motivations and arcs clear and sensible. In fact, I’d argue that this book also has better characterization than Of Fire and Stars, as only the protagonists in that book really seem well-rounded.

Parts of this book made me extremely angry. But make no mistake, this is not a criticism. On the contrary, it’s been a while since a book made me feel emotions that strong. I was furious and indignant on Asra’s behalf, not because the book failed in some way. I also really liked how there’s no clear “good side.” There’s a monarchy and a rebellion, but neither side is wholly good or evil. In fact, I’d say both sides (and Asra’s story) embody the old adage, “The road to hell is paved with good intentions.” This makes for a more complex story and, thus, a better read.

However, this book is not without its problems. For one, as I said, the summary is a touch misleading. This is not a F/F romance. Maybe at the beginning, but even then it’s very one-sided. However, that’s not the fault of the story or even the author. I place the blame on whoever wrote the summary. But, ultimately, the bisexual representation is good (as is the black representation, which Coulthurst consulted sensitivity readers for). Even though I can’t recommend it as a F/F read, I can recommend it as a diverse one.

But the real problems lie in the narration and the manifests. Let’s start with the narration. Most of the time, Asra’s point-of-view is interesting to read from. However, sometimes her thinking is repetitive and she stays hung up on Ina for far longer than she should. It’s a bit circular, which can be annoying to read. The bigger problem, however, is that of the manifests.

Manifests are animal alters that the people of Zumorda acquire as they come-of-age. The process sounds, to my limited knowledge, a lot like the spirit animals of various Native American cultures (albeit more literal). I worry that this could be considered appropriation, not unlike what JK Rowling did when developing American wizard culture. I wonder how this wasn’t picked up by Coulthurt’s sensitivity readers or if she chose readers to specifically address the way she represents black people in this book.

All that said, this is overall a pretty good book and I’m excited to see how and if it will tie into the Of Fire and Stars sequel, Of Ice and Shadows. As long as you don’t go into this book under the misconception that this will be a F/F romance, it’s a decent read. You’ll probably like it better than I did. In fact, it’s written in blood.

Leah on the Offbeat by Becky Albertalli 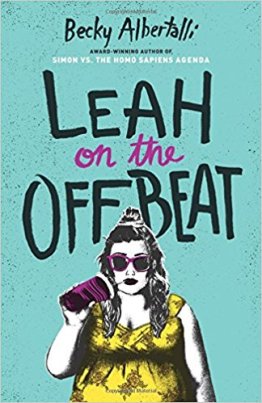 Official Summary: Leah Burke—girl-band drummer, master of deadpan, and Simon Spier’s best friend from the award-winning Simon vs. the Homo Sapiens Agenda—takes center stage in this novel of first love and senior-year angst.

When it comes to drumming, Leah Burke is usually on beat—but real life isn’t always so rhythmic. An anomaly in her friend group, she’s the only child of a young, single mom, and her life is decidedly less privileged. She loves to draw but is too self-conscious to show it. And even though her mom knows she’s bisexual, she hasn’t mustered the courage to tell her friends—not even her openly gay BFF, Simon.

So Leah really doesn’t know what to do when her rock-solid friend group starts to fracture in unexpected ways. With prom and college on the horizon, tensions are running high. It’s hard for Leah to strike the right note while the people she loves are fighting—especially when she realizes she might love one of them more than she ever intended.

My Thoughts: I read this book in one day, if that tells you anything. It’s a compulsively readable story, filled with scenes and lines that made me smile, laugh, and even cry. The story is relatable and heart-warming. Everything about this book works for me… well, almost everything.

The characterization is great. Everyone has an arc, even if they’re not at the center of the story. In fact, this story made me fall in love with Leah (I previously didn’t care for her). Unfortunately, it also made me incredibly frustrated with her. Part of the reason is I used to be like that, ruining things, knowing I’m ruining them, and still being unable to stop myself. I still am to some extent. So that mirror was a bit too… personal. But it gets really annoying to read over and over again. As such, I really appreciated the scenes where Leah makes an effort to be better.

The plot is very character-driven, which I always love. The diversity is fantastic. The dialogue feels real, as do most of the relationships (I didn’t really care for how everything was tied up in a little bow, even though I get why Albertalli did it). Thematically, this book is pertinent. It focuses on change and goodbyes, and the fear of both. It also focuses on inner conflicts, like self-doubt and the fear of taking a chance. As someone with anxiety who’s looking to move to a new area, this book couldn’t have come at a more apt time.

Of course, aside from Leah sometimes being a frustrating character (especially regarding how she treats her mother and mother’s boyfriend), there is also the gatekeeping scene. I’ll try to keep this as non-spoilery as possible, but essentially a character comes out as “lowkey bi” and Leah decides that’s not bisexual enough. Now, I get her frustration. She’s been a closeted bisexual for years, so it can be aggravating to see someone you thought was straight seemingly only dip their toes in and yet still “get credit” for coming out. However, it’s not really up to Leah what does or does not qualify as “true bisexuality” or how someone experiences their sexuality.

And, truthfully, it’s not the fact that Leah gatekeeps that is the issue. The issue is she’s never held accountable. She never apologizes or learns her lesson. She never realizes she was the one in the wrong and comes to terms with her judgmental behavior. It’s just forgotten. This was a massive oversight on Albertalli’s part. There should’ve been a scene where Leah apologizes and accepts that she was wrong.

Overall, this is an excellent book. I rarely read contemporary, but Albertalli is officially on my Must Read list. Whatever she puts out, I’m picking up. And, even though there are still some issues with her storytelling and representation, she’s mostly doing a really great job. My only regret is that I didn’t have these books in high school. But, alas, I’m only just getting off my offbeat.

I went into Inkmistress with high expectations and Leah on the Offbeat with relatively low expectations, and each book wound up to be pretty good. Except, of course, for a few issues I can’t quite get past. And yet, I can’t condemn either book, because they are both overall very good. Whether you’re in the mood for a future written in blood or a fluffy romance, I’d gladly recommend adding both of these books to your TBR. After all, we all have our flaws.

5 thoughts on “It’s Great, Except…: A Dual Review of “Inkmistress” by Audrey Coulthurst and “Leah On the Offbeat” by Becky Albertalli”