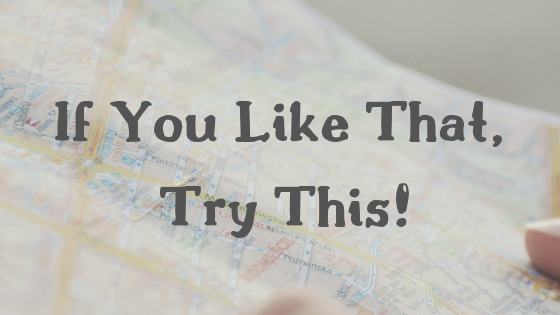 If You Like That, Try This is a meme in which I recommend things based on other things (i.e. if you like one book, you’ll probably like this similar book). It’s a great way to introduce people to some great stories they may have missed out on.

Today I’m recommending books based on

If you like (or, like myself, don’t like) Throne of Glass by Sarah J. Maas, then you’re sure to enjoy these other great books. If you ask me, the series I’m going to recommend do right what Throne of Glass did wrong. Whether or not you’re a fan of the series, these are stories you should absolutely give a chance.

If what you liked (or wanted to like) about Throne of Glass was that it features a badass assassin protagonist, this is the book for you. Mia Corvere attends an assassin school on her road to vengeance. She is hell-bent on murdering the men who tore her family apart.

What’s great about this series, aside from great characters and world-building, is that the reader actually gets to see Mia be an assassin. The text doesn’t make it morally okay by having her only kill bad guys. Moreover, Mia is actually shown killing people. Her occupation isn’t just told to us after the fact.

The Nevernight Chronicle is a story that really delves into the dark side of an assassin’s life. It faces the ugliness head on and never tries to justify Mia’s profession. Mia becomes a great assassin because she’s willing to be a monster, not in spite of her good nature. And I love her all the more for it.

If what you liked (or wanted to like) about Throne of Glass was the lost queen trope, then this series is right up your alley. The Lunar Chronicles contains perhaps my favorite use of this trope because I love the character it revolves around. In an effort to avoid spoilers, I’ll just say it’s less about reclaiming her birthright and more about helping her people.

It also checks off the “retelling” box, being that each book in this series loosely bases its plot on a fairy tale. Though largely forgotten now, Throne of Glass began as a Cinderella retelling. The Lunar Chronicles, however, is far more effective on this front.

This series has the diversity that Throne of Glass lacks. It features multiple characters of color in its main cast, as well as disabilities like mental illness. Meyer has always taken great care in making sure her stories are diverse.

The Lunar Chronicles is, in many ways, the good version of Throne of Glass. A lost queen and her friends must take down an evil ruler, facing challenges along the way. This series does everything Throne of Glass aims to do, but well. The Rampion Crew will steal your heart and never let go.

If what you liked (or wanted to like) about Throne of Glass was the badass female characters and cool monsters, you’ll want to check out this trilogy. Though all the stories are connected, each book follows a different total bad bitch. Fans of Celaena/Aelin will love Katsa and Bitterblue, while fans of Manon, Lysandra, or Nehemia will love Fire.

Much like the fae and Ironteeth witches of Throne of Glass, this series is filled with people with strange abilities and humanoid monsters. Katsa is a Graceling and her Grace (or ability) is killing. Fire is a monster. If you’re itching for more monster-y goodness, this series will scratch it.

Though Bitterblue doesn’t have magical powers, she is a young queen trying to rebuild her kingdom. If you’re a fan of Aelin’s clever and inquisitive side, you’ll love her story. The way she and her counterparts interact with their world is exciting and fun— an adventure you need to go on.

The Graceling Realms is the perfect way to fill up after Throne of Glass whet your appetite for badass women. Even better, it’s filled with magical powers and beautiful monsters. You’ll wish you could be transported directly into these realms and never look back.

Zélie embarks on said journey with the same amount of anger and determination that fuels Celaena. However, unlike Celaena and Co., Zélie and the entire cast of this book (minus one character) are black. In fact, the story is based on a melting pot African cultures. It stands out in a sea of white fantasies.

It also deals with the issue of magic in a more nuanced way. Zélie and Inan both examine the pros and cons of magic’s return. The king got rid of magic for more reason than just oppression (though that was a major factor). It considers the complexities of the issue beyond mere good vs. evil.

Moreover, it dabbles in forbidden romance in a more effective way than Throne of Glass. In Throne of Glass, it’s pretty much always almost a non-issue when supposed enemies fall for each other. In this story, Zélie’s romance is much more complicated.

Legacy of Orïsha is a fresh take on a similar issue— a “magic is gone” plot based on oppression, rather than crushing enemies. The characters must make bigger sacrifices for the sake of freedom. And, of course, there’s no white savior. Magic is alive once again in this tale.

If what you liked (or wanted to like) about Throne of Glass was that it follows a displaced queen reclaiming her birthright and righting wrongs, this adult high fantasy is the way to go. You’ll fall head over heels for Kelsea Glynn and her vision for the Tearling.

This series also includes male and female villains, much like Throne of Glass. However, they’re far more nuanced. The Red Queen is a forced to be reckoned with, but reading from her perspective also makes her deeply human. She is everything Maeve could’ve been. Row Finn is a cult leader and immortal demon-like thing. So… I guess he’s like the Valg?

The Queen of the Tearling isn’t the story of a young queen saving the day and building the ideal kingdom. It’s much more realistic than that. It’s challenging and painful, filled with very real loss. Kelsea is a queen that wants the best for her people, not to be told by her people that she’s the best. And I don’t know about you, but that’s the kind of devotion I want in a leader.

What books do you recommend for Throne of Glass fans or to people who wanted more from the series? Tell me about them in the comments!